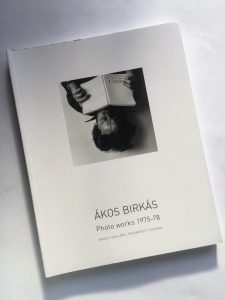 [...] The context of art in the sixties and seventies was mostly shaped in the West by the lack represented by the white cube (the speculative lack of the art object and art). For the progressive artists of the socialist shortage economy, lack was primarily a lack of the context of art (community, market, language, theme, discourse, embeddedness, reflexivity, correlation, control, etc.) There was no interchange between the official art of the period and its underground - obviously there was a connection, but an unreflected one, and research on it is rather thin. So there was virtually no shared reference point for a definition of art. Semi-official art and the underground were excluded from official reality; lacking visibility, they could not generate discourse.

Ákos Birkás gave up painting in 1975 and “moved” into the Museum of Fine Arts, turning it into his photo studio as it were. He photographed the classical works on display (the air between them), the space and the building and created unorthodox portrait series. The Museum walls are not “sticky” yet with the content transferred from the works, and the art horizontally displayed within the museum is reliable because it is dead; in its irrelevance it does not push itself before the analytic eye. Despite any kinship, this museum space with its laws and potentials is markedly different from O’Doherty’s white cube, which American artists so wished to leave behind, which the Situationists never entered (stopping themselves several times at the gate), and which did not exist in Hungary at the time.